St Alban, the first Christian Martyr (Protomartyr) in England from the 4th Century and patron saint of converts and torture victims. Although a Roman soldier and a pagan, Alban sheltered a priest; Amphibalus, in his house. The priest made such a profound impression on him that he became a Christian himself.

Soldiers raided Alban’s house and to help the priest escape, Alban and the priest swapped clothes. Alban was captured and ordered to renounce his faith. He proclaimed himself a Christian and refused to reject his faith.

The priest turned himself in when he heard of Alban's arrest and imprisonment in the hope that Alban's life would be saved. Alban was sentenced to endure all the punishments that were to be inflicted upon the priest, unless he would comply with the pagan rites of their religion. Alban refused, and declared, "I worship and adore the true and living God who created all things." (The words are still used in prayer at St Alban's Abbey). The enraged judge ordered Alban to be scourged, thinking that a whipping would shake the constancy of his heart, but Alban bore these torments patiently and joyfully. When the judge realised that the tortures would not shake his faith, he gave orders for Alban to be beheaded.

On the site of the execution now stands the Cathedral and Abbey Church of St Alban’s (Hertfordshire).

As a school and to pay homage to our patron, St Alban we celebrate the nearest school day that falls either on or around the 22nd June. 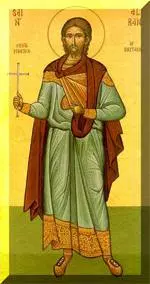